Electrical costs can be a major portion of a wastewater system’s operating budget. Solar powered aeration systems offer the possibility of substantial savings over conventional powered systems. We carry solar powered systems by ProLake™ that offer an affordable, low maintenance and dependable option for aerating your lagoon. 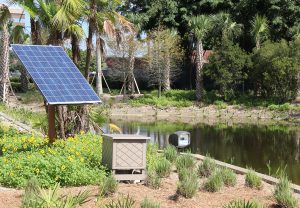 The obvious main advantage of solar power is that you are not having to pay for the electricity to power your air delivery system. You can leave it on during the off season to maintain DO levels in your lagoon more or less free of charge.

The Main Disadvantage of Solar Power

The most obvious disadvantage of solar power is that it relies on the sun. During the night hours or in cloudy weather, a solar powered system must rely on batteries or shut down until the sun comes back out. Depending on the location, this can be a minor or major issue.

If you have an existing aeration system that is powered by the conventional power grid and would like to utilize solar power, we have a solution for you! The PicoCell by Waste Stream Technologies seamlessly blends energy between a solar array and the power grid. PicoCell, a unique solar power controller based on advanced patented technology, can run any
AC motor directly off solar panels.

The PicoCell offers the following benefits:

• Maximize solar energy use and use electricity at night or when cloudy
• Seamlessly blends energy between your solar array and the power grid
• No circuit panel installation required, plugs in as simple outlet load
• Universal compatibility – single/three phase, 50 or 60Hz, 120Vac or 230Vac
• Simple installation and smart operation