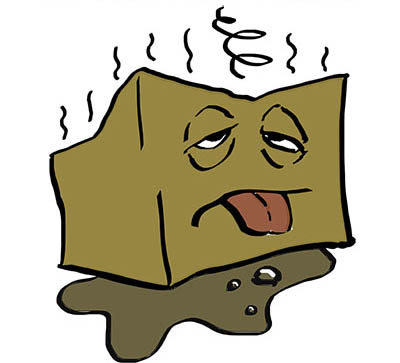 Don’t ignore odors coming from your septic tank. Solve them or the problem will only get worse!

If you have a septic tank, you should be able to use it problem-free, for years. However, it’s not unusual to experience septic odor problems with a septic system. Regular septic tank maintenance is vital to long-term, trouble free septic tank operation.

How do septic tanks work?

In some areas without a local sewer system, land owners are have to install their own septic tank systems to deal with sewage and wastewater. A septic tank is a tank made of steel or concrete that is buried under the ground. The wastewater flows into the tank and builds a layer of “scum” at the top and heavier waste sinks to the bottom. Water rests in between the scum, and the layer of sludge at the bottom.

As wastewater flows into the tank, the wastewater already in the tank flows out. This water flows to a drainage field, called a “leach field”. A leach field consists of perforated pipes resting in trenches. Typically, gravity is used to transport the wastewater away from the dwelling, where it is absorbed by the ground in the area of the leach field. If the septic tank system does not perform properly, it can contaminate the area, costing thousands of dollars to clean up.

Septic tank system that’s too full: This could be caused by a faulty pump, a blocked outlet pipe to the leach field or too many solids building up in the bottom of the tank.

Dry drains in your house: Drains and toilets will have a small amount of water in them that prevents sewage gases from seeping from the pipes and septic tank back through them into the house. When a drain is dry, there is nothing to stop the gases from entering the home or dwelling. You’ll notice a foul odor inside your home if this happens.

Blocked septic venting systems: Without a working venting system, sewage gases can’t escape from the septic system. It’s possible that this situation can lead to a toxic hazard to home occupants, and even pose the threat of flammability. Blocked vents can be caused by new landscaping or Ice or frost. When this happens, sewer gases must escape somewhere and often find their way back into the home. Like the dry drain scenario, you may smell odor in the house but you may also notice odors outside the home, too. If you suspect this condition, inspect the outdoor plumbing vents, and clear them as necessary.

How to prevent septic odor problems